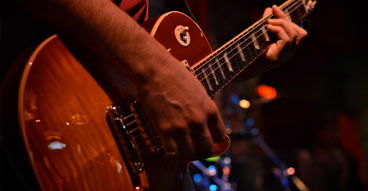 Advice from a Boston Guitar Teacher

I found 3 new songs to add to the list of easy songs to show to beginner guitar players in September: Nothing More by Alternate Routes, Bottom’s Up by Brantley Gilbert, and Skinny Love by Bon Iver.  Also, one of my students brought in a songs that’s good to learn if you’re starting to work on guitar solos – Caught In A Dream by Alice Cooper.

I taught this song in a guitar lesson to one of my students at Nobles.  The picking pattern is pretty easy during the beginning of the verse, though it does get a little harder in the later verses.  You just need to know the following chords: E minor, C, and D.

This song is in a crazy alternate tuning, but you can play it in standard tuning using the following chords: A minor, C, F major 7, and then some other unusual chords.  You can get the sheet music for this song from sheetmusicdirect.us.

I told my student during this lesson that this song exemplifies why it’s important to know how to read tablature and standard notation.  If a song is in an alternate tuning, and you don’t want to retune, you can look at the actual notes that are played in the standard notation and then decide if you can play the chords using standard chord forms.  It won’t sound exactly like the song, but it will sound close.

This one is a good strumming song using C, G, F, and A minor.  The strumming pattern is based on 16th notes, and you can get the sheet music for the guitar part from the band’s website at the link below:

Caught In A Dream – Alice Cooper

The guitar solo in this song is based on the E minor pentatonic scale, is not too fast, and has some simple bending riffs in it.