How to Hold the Guitar

Assuming you’re going to be seated when playing the guitar, place the guitar on your right leg and lean it up against your body, and wrap your right arm around the back of the guitar body as shown in the video below.  If you’re left handed, reverse what I just wrote to left leg and left arm.  You should feel like the guitar is securely held between your leg, body, and the arm that is wrapped around it.  You should not feel like you need to use your fret hand to secure the guitar from moving around. 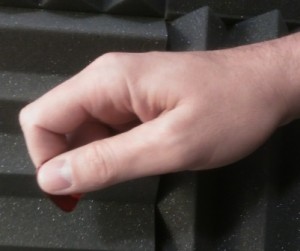 How to hold the pick

Hold the pick between the thumbprint part of your thumb and the side of the index finger (the side facing the thumb), with the smaller part of the pick pointing down.  Keep a loose grip on the pick, as loose or looser than you would hold a pen or pencil.  There’s been a few times when I’ve injured my pick hand and had trouble writing, but was still able to hold the pick and play the guitar; that’s how I know that I hold a pick that loosely. 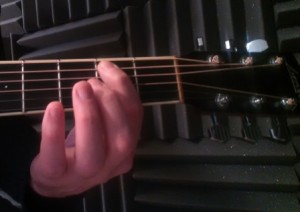 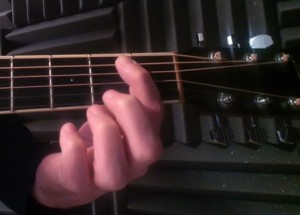 When playing chords on the guitar, you have to press down the strings with your fingertips and keep your fingers perpendicular to the neck (straight up) so they don’t lean against adjacent strings and mute them.  It’s okay to have your thumb over the top of the neck when playing open chords, but you can’t do that when playing barre chords.  If your fingers are on adjacent strings, you won’t be able to get both of them against the fret wire, as there isn’t enough room between the strings to do this.  Just put one finger against the fret wire and cram the other finger as close to it as you can.  Take a look at the picture below. 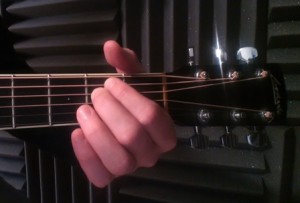