Master the B major chord with these lessons!

The chord that gives beginner guitar players the most problems is the B major chord which looks like this: 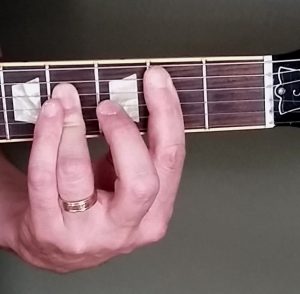 The first chord diagram is how I generally play it.  The one in the middle is an alternate way to play it if you have trouble bending your third finger backwards – your fourth finger might have a little more flexibility.  The last one can be used if you are getting really frustrated, but it does require a huge stretch between the first and second fingers.

This chord is the most difficult because you have to barre with the first finger and the third or fourth, and requires more strength and flexibility than any other chord you will encounter in pop music.  If you haven’t been diligent about putting your thumb behind the neck for some of the easier barre chords, it’s going to haunt you now.

Chord Exercises with B Major

You’ll commonly find the B major chord in songs with E major and A major, so you should try to practice the chord with those two open chords in whole, half, and quarter notes.  If you’ve learned the root 6 minor barre chord, also try including F# minor and G# minor in the exercises, and also the root 5 C# minor chord.

There’s another chord that involves a barre’d third finger – the root 5 ninth chord.  See below: 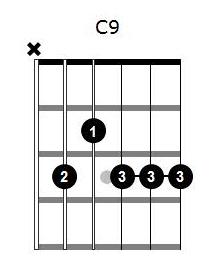 This chord is more common in jazz and blues than in rock, but it is a good one to know regardless of what style of music you normally pay.  FYI, the formula of this chord is Root, 3rd, 5th, flatted 7th, and 9th; in this case the notes from left to right are C, E, Bb, D, G or 1, 3, b7, 9, 5.  Notice that the third finger is laying across 3 strings, but on the bottom three so you don’t have to worry about bending it backwards to leave the first string open.  If you can master this chord, that should put you one step closer to mastering the B major chord, and it’s definitely easier to play than the B chord.  Try playing a basic 12 bar blues with the chords below:

A couple of songs you can learn that use these chords are “Stormy Monday Blues” by the Allman Brothers (originally done by T-Bone Walker) and “Song For My Father” by Horace Silver.  The chord chart for “Song For My Father” may call for 7th chords, but you can substitute 9th chords for them.  Also check out this article from Premier Guitar – http://www.premierguitar.com/articles/Deep_Blues_9th_Chords_and_the_Truth_Pt_1